Where Legends Are Made...

One of the things that we most enjoy about being involved in the sign and graphics industry, is the variety of interesting projects that we work on. Recently, Vital Signs was approached to work on a very historically significant project.

Below is a re-post of the article that was written and featured by Dona Dreeland in the Pittsburgh Tribune Review.

On behalf of the Vital Signs Team, we are honored to have worked on such a meaningful project. 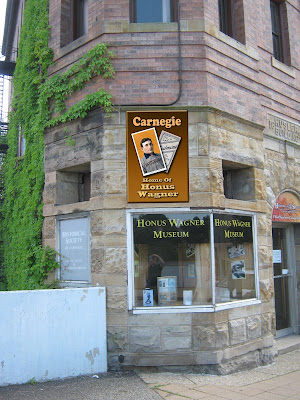 This sign, created by Vital Signs of Carnegie, will hang on the Historical Society of Carnegie building and remind visitors that Carnegie is the hometown of Honus Wagner, the legendary Pittsburgh Pirate.


New shops and old shops sit side by side. Turquoise-painted lampposts mark the little bridge, and visitors soon will be able to look up and gaze at a giant.


A sign will be installed on the side of the Husler Building that will remind people that Carnegie is Honus Wagner's hometown.
The sign's location couldn't be better because the building is home to the Historical Society of Carnegie and the Honus Wagner Museum.
Inside the museum are treasures connected with the baseball legend, who played much of his career from 1897 to 1917 with the Pirates. The sign is a magnification of the first Honus Wagner baseball card. The sign was designed and created by Vital Signs, a local business, and supported by the Carnegie Arts Initiative, an organization formed to promote arts and artists.
“We want to bring art into public spaces,” said Bob Podurgiel, who serves as the group's treasurer. “Art changes people's perceptions of the town.”
Four years ago, the sunflower paintings were installed on another side of the society's building. Harry Demel hand painted the panels, coated them with acrylic to withstand the weather, and had the pieces framed and bolted to the wall. Demel called it a “movable mural.”
In addition, a sunflower garden nurtured by rainwater runoff from the roof was planted. The project was funded by a grant from Pennsylvania-American Water Co., Podurgiel said.
One project generated the other, and Vital Signs took the Wagner design submitted by the historical society to its staff. It was enlarged, printed on vinyl material, adhered it to a metal backing and laminated to protect it from the sun. Steve Burkett, one of the owners of the company, anticipates its placement on the building at the end of June or early July.
It's a part of Dan McGrogan's plans to attract people to the history inside the building by “freshening it.”
McGrogan took over the directorship of the society when his mother, Marcella, its founder, retired.
The Wagner sign is only a hint of all of the items in the museum, which contains photographs, clippings and cards from the former Pirate's illustrious career. Many of the items had their first home in the Elks Lodge, where Wagner had been a lifelong member. When the Elks found there wasn't enough space to display the items, they gave them to the museum to exhibit. The Wagner artifacts now are in their own room, ready for a morning of browsing by any baseball fan.
That was enough for the five-person arts initiative board to get involved in the sign project. Its membership also supports those involved in film and music. September's jazz concert will benefit the Boys & Girls Club of Carnegie, and the proceeds will be used for music lessons for children there. In its third year in Carnegie, The New Works Festival will bring playwrights from all over the world to the borough.
“For six weeks, we're a very cosmopolitan town,” Podurgiel said.
Dona S. Dreeland is a staff writer for Trib Total Media. She can be reached at 412-388-5803 or ddreeland@tribweb.com

Posted by Vital Signs PGH at 12:52 PM No comments: